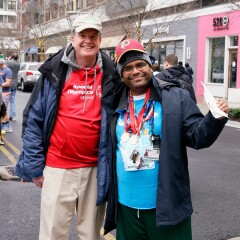 Peter has been active with the Torch Run and Special Olympics on the local, state and international level for over 20 years in Virginia and in other locations that he has lived and worked. He always has made sure to attend as many state, regional and international conferences as possible and bring ideas back to his department from each. Peter set out to strengthen his department’s relationship with Special Olympics, the Torch Run and other jurisdictions, in order to achieve Torch Run goals, not only at the local level, but also the state level. Seeing an opportunity, Peter planned, executed and volunteered at numerous Torch Run events, Little Feet Meets, golf events, and Cover the Cruiser fundraisers. He has also volunteered at numerous Summer Games, as well as participating in multiple Polar Plunge events across the Commonwealth.

Peter was instrumental in helping to organize his department’s first Crossfit event, raising $11,000 the first year, as well as helping grow Plane Pull participation into, not just one unified team, but two! Doing things unified with athletes is really the main passion of this award winner. He has helped to initiate the Mosaic District Polar Plunge, raising over $35,000, and more recently, joined the local area Special Olympics bocce team, playing alongside Special Olympics athletes, and even officiating some of the games, when not playing.

Establishing close relationships with both the athletes and their families, Peter has learned that the athletes wanted to have “swag,” just like college teams, so he designed and purchased Special Olympics “hoodies” for the entire team. Once COVID struck and many events were cancelled, he has kept his commitment to the bocce athletes, and virtually holds a meeting every other week so that he can keep in touch with the team.